On Sunday, December 17, 2017, the U.S. faced the Canadian women’s hockey team in the pre-Olympic series finale. The game occurred in Edmonton, Alberta at Rogers Place where Canada scored a 2-1 victory with just 30 seconds remaining of overtime. The teams were battling for the Olympic Winter Games at PyeongChang in 2018 and it seems that in the end, Canada obtained the 4th victory in a row against the United States.

The only goal of the night for the Americans was scored by Hilary Knight. Jennifer Wakefield was the one who gave the decisive strike for Canada. Maddie Ronney did her best, making 13 saves for the USA.

The Olympic Winter Games are close, so stay tuned to see how it all works out.

The lead was taken by the Canadians after Marie-Philip Poulin scored late in the first period as a result of winning a power play. After quite some time, Knight took a backhand pass from Coyne and tied the score 1-1 after passing the puck beyond the Canadian goaltender Shannon Szabados, only 6 minutes before the end of the second period.

At the start of the third one, each team had a penalty shot in the first 5 minutes. After that, there were few notable events and it all came down to the overtime goal of Canada that brought them a victory some might call lucky. 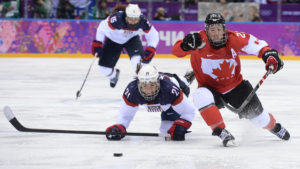 The U.S. has lost once before against Canada in overtime, in 2014 at the Olympics, thus parting ways with the gold medal. Since then, the two countries played 22 games. The US managed to beat its northern sister at the women’s world championship every year since the Sochi. When it comes to the Olympics though, the Americans seems to not be in luck because the gold was taken by Canada for the last 4 editions.

The U.S. really look forward to winning the gold for the first time since 1998, the year when hockey was actually included in the Olympic program. Sadly, it seems they started off on the wrong foot here. Fans hope their luck will change this year and root for their compatriots to shatter their rivals. On January 1st, the USA will announce its 23-player Olympic roster and they are scheduled to open the competition in a play against Finland on February 11.